We got a four day weekend this weekend because of Tomb Sweeping Day + Children’s Day in Taiwan.

It poured (like, actually POURED) all day + I spent most of it at my fave cafe, Yaboo, trying to catch up on posts about my time with mi madre. But as I got to writing several Singapore posts today, I realized that there was something far more timely to discuss. 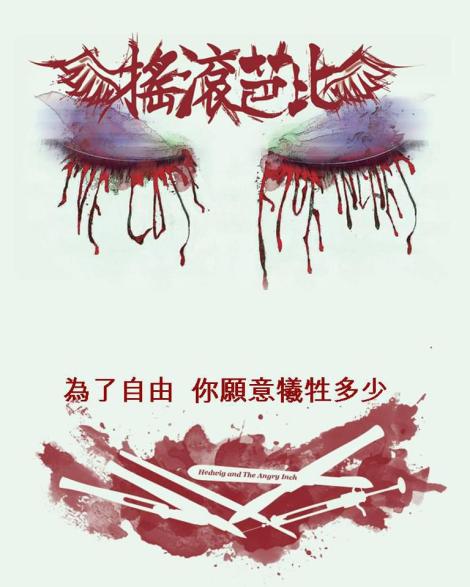 I was able to catch it with my mom last week + we had a blast!

Hedwig and the Angry Inch is about a transgender East Berliner lady whose sex change was botched, so she was left with…an angry inch. It is basically the story of her life–the good + bad.

I did not see it in NYC when it was up, but have seen the movie + saw a production of it up at Syracuse Stage, visiting Syracuse University (GO CUSE!) the year before I started my studies at the Drama Dept. So I was quite familiar with the story before getting to see this Mandarin version.

I cannot comment on how the translation into Mandarin worked or did not work, but the show rocked!

The cast that I saw (it rotates!) did a fantastic job of capturing energy of the show. The band was awesome, the cast fantastic, production values (OMG, the lighting by 郭效承!!) were top notch, + the rock-show energy was definitely alive + present throughout the show. The Hedwig I saw was quite masculine in terms of movement, but I thought that it totally worked for the piece. + the final catharsis at the end of the play was truly moving.

It is definitely worth catching. So, Taipeiers: you’ve got till 4/14th! Check it out!